What are the basic field hockey rules?

Field hockey or hockey is a widely played game across the globe.  Introduced in the Olympic Games in 1908, a World Cup for Hockey was established in 1971. Hockey is believed to have originated in the earliest civilizations of the world. However, the modern game known as field hockey was developed in the British Isles.

Field Hockey is a game played between two teams made of 11 members. They are armed with sticks with curved edges that are used to hit a small hard ball to score a goal. These sticks measure anywhere between 28 inches and 39 inches long and weigh between 340g and 790g. The playing arena is generally a grass pitch or any artificial surface. However, owing to modern technology artificial or astroturf pitches have become commonplace in hockey.

The idea of the game is similar to football; get the ball in the goal. The opponents race each other with their hockey sticks while fighting for the ball and passing it to their teammates in order to get the ball past the opponent’s goal. The team with the most goals wins and if both the teams get the same number of goals, the match is called a draw.

25 yards from the backline lies another line which divides the further pitch. This line which is parallel to the backline is called a 25 yard line. In front of the goals are two clearly marked semi circles. One is a solid arc and the outer semi circle is a dashed arc. This forms a ‘D’-shaped area measuring 16 yards out from the goal post. This is referred as striking circle. An attacking player must be within this area to score. It is also known as the ‘shooting circle’, ‘goal circle’ or ‘D’. The penalty spot is marked 6.475m towards the inside of the pitch from the back line.

Field hockey has 11 active players on the pitch and the substitutes. There is one goalie, who tries to save the goal and 10 field players who tries to score a goal. The field players are further split up into midfielder, defenders and attackers. The number of players in each of these positions will depend on the formation that the coach suggests for his/her individual teams.

A typical hockey game consists of two halves of 35 minutes each, with half time of 5–10 minutes. A time-out can be called in case of injury. While the on field players are armed with hockey sticks, the goalkeeper dons on thick, lightweight pads as a protection for the legs with his/her stick in hand. The goalie is allowed to kick the ball or stop it with the foot or the body while in the shooting circle. Other players can handle the ball with their respective sticks only.

A coin is tossed before the game starts to decide which team starts the game. After the toss the teams regroup to their side of the pitch. Each team will be positioned in individual halves of the pitch so that they face each other. The team who won the toss game starts the game with a centre pass. The game continues until a goal is scored. When a goal is scored, the teams again regroup to their side of the pitch to begin a fresh round with a centre pass. 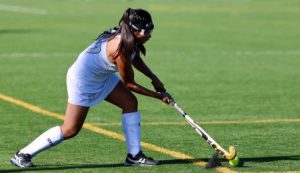 The hard and fast rules of hockey begin with the hockey stick. Players are only allowed to hit the ball with the flat side of their stick during the game. Only the stick can be used to handle the ball, use of feet, or any other parts of the body, to control the ball during the game is strictly prohibited.

A field goal, a goal from the penalty corner or from a penalty stroke is considered as a goal. A field goal is scored from inside the striking circle by landing it in the goal guarded by the opponent’s team. If the ball is hit from outside the striking circle even if it lands in the goal, it won’t be considered as a goal. Fédération Internationale de Hockey, commonly known by the acronym FIH states that, “A goal is scored when the ball is played within the circle by an attacker and does not travel outside the circle before passing completely over the goal-line and under the cross- bar.”

Hockey is strictly a non-contact sport. Therefore, players may not trip, push, charge, interfere with, or physically handle an opponent in any way. These fouls will result in a free hit or a penalty corner for the opponent’s team. For in depth detail about the rules for outdoor/indoor check out the team USA resources.

Players are not supposed to touch, handle or interfere with other players or their sticks or clothing. They are prohibited from playing the ball dangerously or in a way which leads to dangerous play. Players can stop, receive and deflect or play the ball in a ‘’controlled manner’’ at any height including above the shoulder unless it is dangerous or leads to danger. The game recommends that players maintain a distance of 5 metres from an opponent who is trying to receive a falling raised ball until it has been received, controlled and is on the ground.

Another rule is the third party obstruction.  Sometimes, a hockey player stands in between the ball and an opponent to allow a teammate an unobstructed reach to the ball. This is also considered a punishable offence.

The general ways for punishment of offenses are free hit, penalty stroke and penalty corner. Free hit is awarded by the umpire for any offenses that occurs outside of the scoring circle. A free hit is taken close to where the offence occurred. When a free hit is being executed by a player all other players should be at least 5 metres away from the ball.

The time and play are stopped after a penalty corner is awarded to a team. A penalty corner is granted when the defense either commits a foul inside the striking circle or intentionally hits the ball over the end line marking the boundary. The ball is placed on the backline at least 10 metres away from the goal  post for taking the hit.  Before the ball is hit by the attacking team, the players including the goalkeeper on the defending team are not supposed to move.

When an offense is committed by the defense that prevented a certain goal then a penalty stroke is awarded.  Time and play are stopped for a penalty stroke as well. The ball is placed on the penalty spot and the player taking the stroke must stand behind the ball within playing distance before beginning the stroke. A goalkeeper is not permitted to move from behind the goal line before the stroke is attempted by the attacking team.

Much like Football, hockey players are also shown a card for more serious offenses. These are green, yellow and red cards. If a player breaks the rules a green card is shown as warning to forbid further offenses on the field. He /she could also be temporarily suspended for 2 minutes of playing time.

A yellow card results in a hockey player being sent off the pitch for 5 minutes. For the duration of each temporary green and yellow card suspension of a player, the offending team plays with one fewer player.  Temporarily suspended players must remain in a designated place until permitted by the umpire to resume their position in the field.

When the umpire shows a red card, it indicates that the player is permanently suspended from the current match. Player should immediately leave the pitch in this case. He/she could also be suspended for a few following matches. If the player is awarded a red card,  the offending team plays for the rest of the match with one fewer player.

The game duration for college hockey is 35 minutes before and after the half time while school hockey has 30 minutes of game time in each half. College hockey allows a seven minute half time while school games get a 10 minute half time. The former is permitted for one two minute timeout per team per game. The latter is granted two 90 second timeouts per team per game. School hockey players will be awarded penalty for requesting more than 2 timeouts.

It is not necessary that every offense to the set rules will be penalised. This is because interruptions to the match can be tiresome and annoying. However, all the rules set by the FIH are to be followed to avoid penalties and have a fair game. 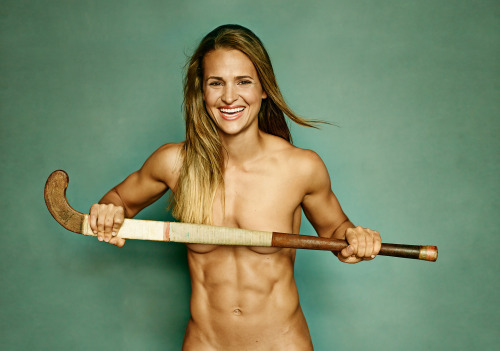 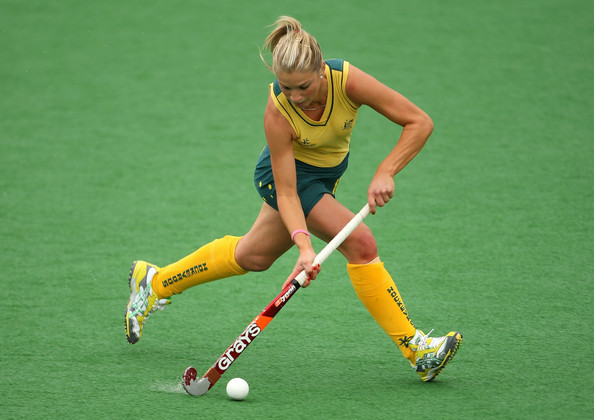 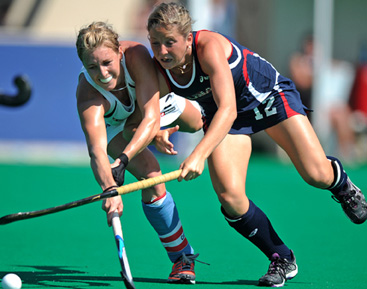